While replying to a mailing list post, I realised I was doing a terrible job of articulating where I thought the value of communication from customers is in the software development cycle(s).


The start of the thread was "is it normal for customers to have no contact with developers?". I said this is a terrible thing, and customers should always be able to talk to developers. This is simplistic - so I refined it to saying that having a primary point of contact before the developers is not a bad thing. This is unclear - so I tried to refine it, and in the process decided it was time to dust off OmniGraffle.As an initial attempt, ths model is that software development is a set of nested cycles, each of which involves specifying the problem in such a way you can test the solution, developing something to meet that specification, and refactoring to improve design and understanding. 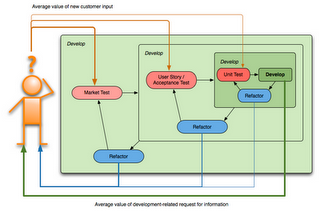 Now, a few unintended things spring out of this, but let's tackle the initial problem - where should customers provide input? My current position is that maximum value of customer input is during test case preparation, as identifying what problem to solve is almost always the hardest part of software. At the other stages, the focus is technical, and, with possible exceptions, customer input is of little value.
I once worked with a guy who constantly sat down by and badgered developers when they were trying to work. Little of his input was useful, and much of it caused delay and multi-tasking. A good deal of it was blue sky daydreaming that probably had no benefit in the next 6 months, at least. It doesn't have to be this bad, but incoming communication that interrupts developer and is not part of a feedback loop is waste, in my experience.

However, developer contact with the customer is of immense value, as the ability to clarify and mine for insight enables simplification of code and reduces rework.

The line is thicker between the inner-most development and the customer because my experience is that when developers have questions during the coding phase, it's often about unexpected costs stemming from technical limitations. These tradeoff conversations enable economic decisions about what is feasible, rather than a build-at-all-cost mentality (yet another issue of fixed-price contracts).I'm making no claims that this is generally applicable, and counter-examples are welcome.What is a Market Test?Watch out - the following is more conjucture than fact. I am only now going through the first iteration of customer development, so my opinion in relation to Lean Startup matters should not be given much (if any) weight.I coined the term Market Test because I couldn't think of anything better to represent the idea that what you fundamentally need is to specify something that will sell (or be used, if it's free/internal etc). An example of what I have in mind is an analytics system that monitors signup rate. It's analogous to the Customer Development Engineering on slide 23 of The Lean Startup slides (Eric Ries and Steve Blank). I nested it because I'm naturally uneasy about any segmentation or conflict (read "discordant" rather than "antagonistic") introduced into a development cycle. The idea that Customer Development Engineering is segmented from or in conflict with development may be a misinterpretation; it may be presented that way for visual impact.But: A team that can't invalidate its own assumptions is lacking a core self-improvement skill.How many cycles are there?It has been pointed out to me that the cycles in this diagram are all fundamentally the same, and that each one falls out of the next. Exactly what needs to be done at each layer is a technicality. That means the diagram simplifies to this: 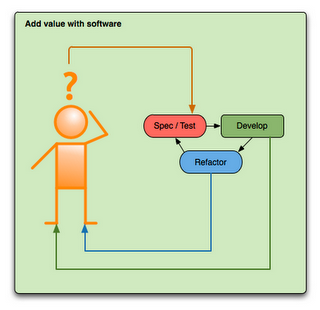 And let's put the customer inside the process FTW. This implies that all you need to develop valuable software is:
Which fits with another idle thought I have at the moment - that the only valuable design principles are those that apply recursively - but that one needs to be worked out first.Comments welcome. Especially any that explain how I ended up at this conclusion simply by asking "where should customers provide input?".